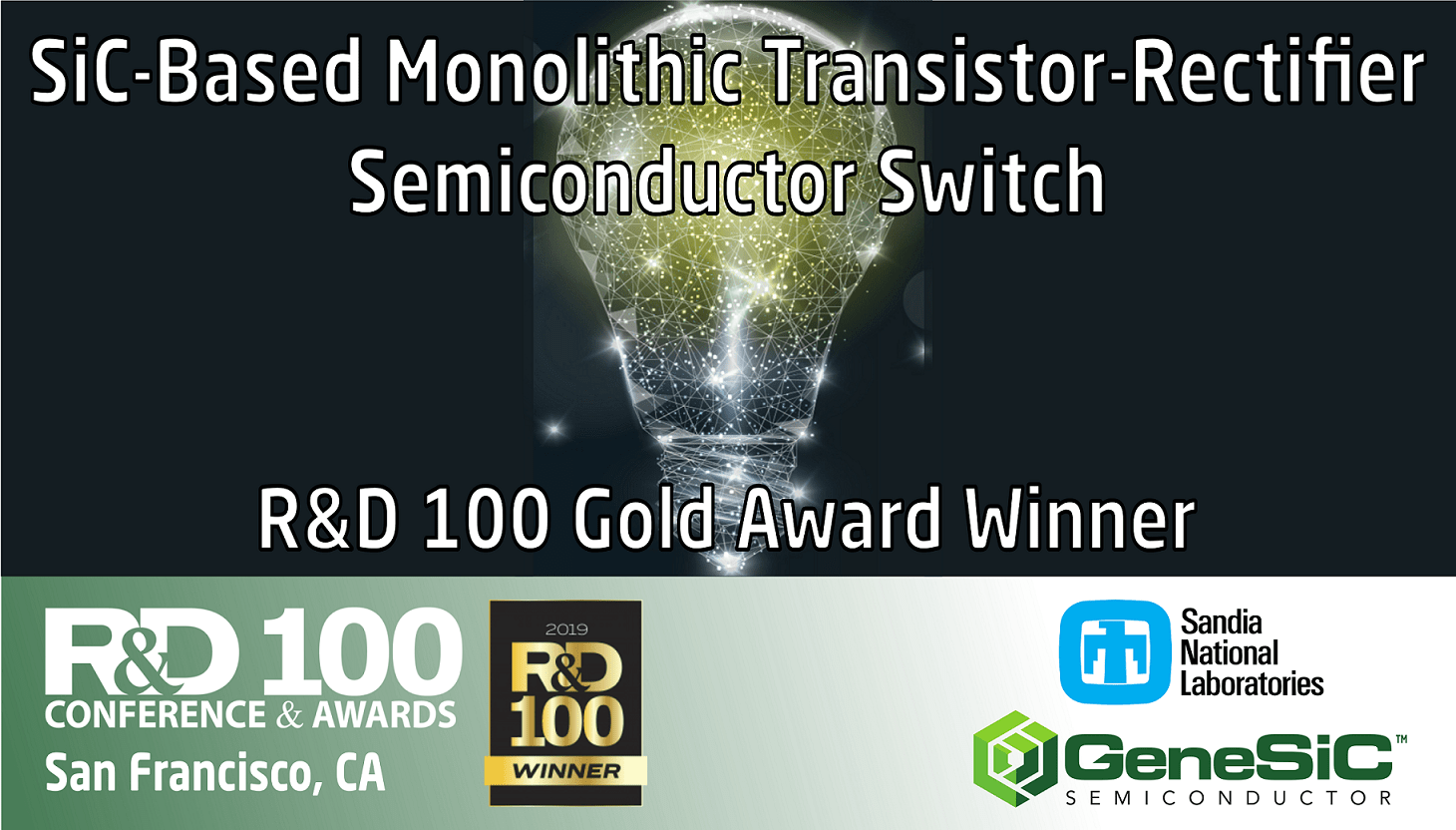 GeneSiC Semiconductor Inc, a key innovator in the Silicon Carbide based power devices was honored with the announcement that it has been awarded the prestigious 2019 R&D 100 Award. This award recognizes GeneSiC for introducing one of the most significant, newly introduced research and development advances among multiple disciplines during 2018. R&D Magazine recognized GeneSiC’s medium voltage SiC power device technology for its ability to monolithically integrate MOSFET and Schottky rectifier on a single chip. These capabilities achieved by GeneSiC’s device critically enable power electronics researchers to develop next-generation power electronic systems like inverters and DC-DC converters. This will allow product developments within electric vehicles, charging infrastructure, renewable energy and energy storage industries. GeneSiC has booked orders from multiple customers towards demonstration of advanced power electronics hardware using these devices and continues to develop its family of Silicon Carbide MOSFET products. The R&D on early version for power conversion applications were developed through US Dept. of Energy and collaboration with Sandia National Laboratories.

The annual technology competition run by R&D Magazine evaluated entries from various companies and industry players, research organizations and universities around the world. The magazine’s editors and a panel of outside experts served as judges, evaluating each entry in terms of its importance to the world of science and research.

According to R&D Magazine, winning an R&D 100 Award provides a mark of excellence known to industry, government, and academia as proof that the product is one of the most innovative ideas of the year. This award recognizes GeneSiC as a global leader in the creation of technology-based products that make a difference in how we work and live.

GeneSiC is a fast emerging innovator in the area of SiC power devices and has a strong commitment to the development of Silicon Carbide (SiC) based devices for: (a) HV-HF SiC devices for Power Grid, Pulsed power and Directed Energy Weapons; and (b) High temperature SiC power devices for aircraft actuators and oil exploration. GeneSiC Semiconductor Inc. develops Silicon Carbide (SiC) based semiconductor devices for high temperature, radiation, and power grid applications. This includes development of rectifiers, FETs, bipolar devices as well as particle & photonic detectors. GeneSiC has access to an extensive suite of semiconductor design, fabrication, characterization and testing facilities for such devices. GeneSiC capitalizes on its core competency in device and process design to develop the best possible SiC devices for its customers. The company distinguishes itself by providing high quality products that are specifically tuned to each customer’s requirements. GeneSiC has prime/sub-contracts from major US Government agencies including ARPA-E, US Dept of Energy, Navy, DARPA, Dept of Homeland Security, Dept of Commerce and other departments within the US Dept. of Defense. GeneSiC continues to rapidly enhance the equipment and personnel infrastructure at its Dulles, Virginia facility. The company is aggressively hiring personnel experienced in compound semiconductor device fabrication, semiconductor testing and detector designs. Additional information about the company and its products may be obtained by calling GeneSiC at 703-996-8200 or by visiting www.genesicsemi.com.